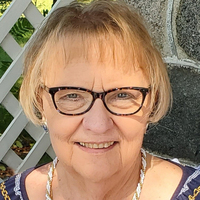 Almaree Cheryl Anderson, 78, Minot, formerly of Velva, passed away peacefully on Saturday, August 6, 2022 in a Minot hospital, with her daughter at her side.

Almaree was born on October 4, 1943 in Portland, Oregon to Margaret (Russell) Loberg and Albert Loberg, of Velva, ND. She attended school in Bergen, ND and graduated from high school in Velva, ND, where she excelled in music and speech, and began making many life-long friends.

Almaree was formerly married to Anthony Anderson and they had three children, Craig, Lori Beth and Paul, all raised in Velva, where they farmed.

During her busy child-rearing, Almaree pursued her education, and received her Bachelor’s Degree in Education from Minot State Teachers College. She began teaching in the Velva school shortly thereafter, where she was a teacher and elementary principal for 11 years. During that time, she was actively involved in the Velva community and completed a Master’s Degree in Education from Tri-College University System in Fargo, ND.  She then served as a principal in Wheaton, MN, Huron, SD and Foley, MN, retiring from her professional career in 2005.

Post-retirement, Almaree worked at Herberger’s in Moorhead, MN and Minot, ND; and served as a Guardian Ad Litem in North Dakota for seven years.

Since 1999, Almaree enjoyed spending her summers at Pelican Lake, MN, where she entertained friends and made many special memories with her grandchildren and great-grandchildren.

In 2018, Almaree returned to her beloved hometown to reside at Valley View Manor and later moved to Maple View Memory Care in Minot. She was lovingly cared for at both facilities.

Almaree was dedicated to inspiring and supporting children in attaining their highest potential. She was an avid reader, engaged in the community, a supporter of the arts, and was always ready for adventure and travel with her many friends and family members. Her strong faith sustained her.

She was preceded in death by: her parents, Albert and Margaret Loberg; and her oldest son, Craig Anderson.

Funeral service for Almaree Anderson:  11am on Monday, August 15 in Oak Valley Lutheran Church, Velva, with a fellowship luncheon to follow. To view the livestream of the service access https://www.youtube.com/channel/UCDxEeU9kkqnOW3f7DKJhRcg

Interment: will be at Rosehill Cemetery in Minot.