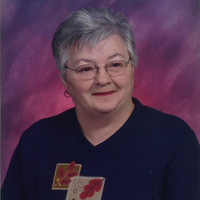 A livestream of the service will be available by using https://www.mtmsales.net/thomas

Patricia M. Andes, 92, Minot and formerly of Parshall and Plaza died on Thursday, July 21, 2022 in a Minot hospital.

Patricia M. Wolf was born on February 12, 1930 in Bordulac, ND to John and Margaret (Rensch) Wolf. She was raised on the family farm and graduated from Bordulac High School where she was a member of the girls basketball team that participated in the state tournament. She continued her education at Valley City State College where she received her Standard Teaching Certificate. As a young adult she taught school in Parshall and there, met her future husband Sam at a dance.

Patricia married Samuel Andes on December 29, 1952 at the Bordulac Catholic Church. They made their home in California for the winter where Sam was a carpenter and Pat worked at the Five & Dime.  When they returned to North Dakota, they made their home on a farm south of Parshall. In 1960, Sam and Pat moved to their farm southeast of Plaza where they enjoyed raising their family, farming, and attending card parties.   Samuel died in 1978 and Patricia continued to reside on the farm, and work at the Plaza School.  She moved to Parshall in 1992 and to Somerset Court- Minot in 2018.

Patricia was a member of St. Bridget Catholic Church of Parshall, the Wabek Election Board, and the Parshall Park Board.  She served as President of the Parshall Senior Citizens and volunteered at the nursing home. Pat belonged to the 59ers Homemakers Group, TOPS, and numerous bowling and softball teams. She enjoyed playing cards (especially pinochle), gardening, baking, canning, rock collecting, oil painting, golfing, watching “The Bachelor” (with neighbor & special friend Donna) as well as the Minnesota Twins.  Her favorite musician was Dave Diffely and when she would see him about town, she would whisper to him “Turn out the lights, the party’s over.”

Mass of Christian Burial:  August 8, 2022 at 11:00 a.m. in St. Bridget Catholic Church – Parshall.  A livestream of the service will be available by using https://www.mtmsales.net/thomas
Vigil Prayer Service: August 7th at 7:00 p.m. in the church.
Visitation: August 7th from 1:00 p.m. to 3:00 p.m. in Thomas Family Funeral Home – Minot and from 5:00 p.m. to the start of the vigil prayer service in the church.
Interment will be in St. Bridget Catholic Church Cemetery.
Memorials are preferred to the St. Bridget Cemetery or to the donor’s choice.