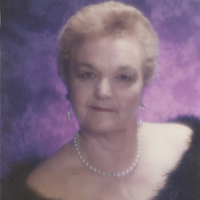 Ruth was born December 12, 1932, in Flaxton, ND, the daughter of Fred and Caroline Wolkhenauer. She was raised and educated at Flaxton and graduated from Flaxton High School in 1950.  She was employed for a time at the Truck Stop near Flaxton and once married to Marvy Mariner. From this union, a son, Jim was born. She had moved to Minot in 1951, where she was employed for a time with Minot Drug.

Ruth moved with her family to Washington State, where her parents ran Williams Resort near Cheney, WA. She was united in marriage to Reese Saulmon for 38 years. They made their home at Malott, WA. After his death in 2000, she returned to North Dakota to be closer to her family. On July 8, 2005, she was united in marriage to Peter Grant. They have continued to make their home in Minot and were most recently residents at Trinity Homes.

Ruth enjoyed attending River of Life Church. She loved cooking for her family to gather on Saturday mornings, sewing and crocheting, and enjoyed having friends on Facebook.

Ruth was preceded in death by her parents and siblings, Evangeline, Dorothy, Alfred, Heide, Gary and Kenny.

Funeral Service: Monday, May 16, 2022 at 11:00 a.m. in Journey Church, Minot.
Interment: Rosehill Memorial Park, Minot.
Visitation: One hour prior to the start of the service in the church.

If you would like to reconnect with the family or express your condolences via phone please call Jim at 701-340-7661.