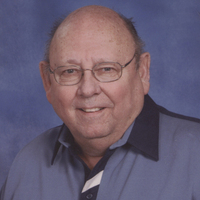 A streaming of the service is available by accessing https://www.mtmsales.net/thomas

Charles (Charlie) was born March 26, 1938, in Carl Junction, MO to Charles L. Freed and Evelyn (White) Douglas. He called Garden City, KS home as a child. He graduated from Shallow Water High School in 1957 and enlisted in the United States Air Force in October of his senior year. Charles served his country honorably as a jet engine mechanic. He was discharged from Minot Air Force Base on May 25, 1962.

Charles was united in marriage to Geraldine Krueger on August 21, 1960. They made their home in Minot and were blessed with two children. Charles found his calling at Mann’s Automotive (Now Auto Value and formerly Hedahls) working the next 38 years until retiring in April 2000. Not one to stay idle for long, Charlie worked as a courier for Trinity Hospital from October 2001 until fully retiring in 2010.

Charles was a member of Christ Lutheran Church, Minot, where he served on the council in a variety of capacities during his active years in the church. He was a member of the American Legion, Elks, Eagles and Moose Lodge, all of Minot. Charles served as a chairman for AAL (Thrivent) and was active in Boy Scout Troop #433 for nearly a decade.

Charlie enjoyed the outdoors and valued the time spent hunting and fishing with family or tending to the fruits of his labor in the garden. He will be remembered for his love of family and country, numerous volunteer efforts, and his unwavering faith and commitment to the church.

Charles was preceded in death by his parents, stepfather, loving wife of 52 years Geraldine, and several family members.

Celebration of Life for Charles Freed:  11:00 a.m. Friday, March 4, 2022, at Christ Lutheran Church, Minot. A streaming of the service is available by accessing https://www.mtmsales.net/thomas
Interment:  Rosehill Memorial Park, Minot.
Visitation will be held on Thursday, March 3, 2022 from 4:00 p.m. to 6:00 p.m. at the Thomas Family Funeral Home, Minot.
Memorials are preferred to Christ Lutheran Church in lieu of plants and flowers.