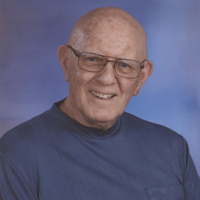 Harlow George Magnusson was born on September 19, 1937 in Minot to George and Rose (Hegle) Magnusson. He was raised and educated in Minot, graduated from Minot High School in 1955, attended Minot State Teacher’s College and earned his Master’s Degree in Elementary Education and Curriculum Supervision from San Jose State College in California. Harlow taught at Palermo High School from 1961-1962 and in California from 1962-1964.

Harlow married Pauline Bucklin on July 10, 1965 in Mandan. They made their home in Minot prior to moving to Watsonville, CA where Harlow taught for four years. The family returned to Minot in 1970 where he taught, coached and was principal at Washington and Longfellow Elementary Schools. He retired in 1996. Following his retirement from the Minot Public School System he was employed on a part-time basis at Christ Lutheran Church assisting with office/financial duties.

Harlow was a member of Bread of Life Lutheran Church, Minot Retired Teacher’s Association and was a former member of the Elk’s Lodge and ND Principals Association.  He was especially proud of having been nominated to the Governor’s Council on Human Resources – ND Committee on Children and Youth.   Also, he enjoyed attending sporting events especially baseball and basketball games.

Harlow’s loving family includes his wife of 57 years Pauline; children: Karen (Paul) Ahern of Redding CA and Kyle Magnusson of Minot; grandchildren: Paul and Sydney. He was preceded in death by his parents.

Celebration of the Life of Harlow Magnusson:  Thursday, January 5, 2023 at 11:00 a.m. in Christ Lutheran Church – Minot.  A livestream of the service will be available by using a link to be determined.
Interment will be in Rosehill Memorial Park – Minot.
Visitation:  Friends may sign a memorial register on Wednesday, January 4, 2023 from 3:00 p.m. to 5:00 p.m. in Thomas Family Funeral Home – Minot.
Memorials are preferred to the Minot State University Athletic Department or Christ Lutheran Church.