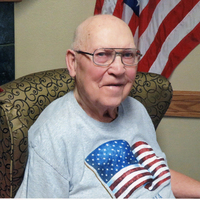 Richard was born December 28, 1930, in Minot, ND to Clarence and Anne (Ellingson) Walker. He attended school in Minot and graduated high school from Minot Model in 1948.

He enlisted into the US Army in 1948 and served his active-duty time until 1950, when he transferred to the Army Reserves serving honorably until his discharge on September 21, 1961.

Richard was united in marriage to Donna M. Milkey on August 3, 1952, in Minot, where they made their home. Richard was employed by the Great Northern Railroad for 15 years, first as a brakeman and then a conductor. In 1962, he started farming in McKinley Township of Ward County, raising small grains for the next 28 years of his life, retiring in 1990.

Richard was a member of the Minot American Legion, VFW and AMVETS. He was in Toastmasters and part of the Minot Model Alumni Association. He enjoyed hunting, fishing and attending basketball and football games in Minot. Richard also enjoyed traveling with family. He will be remembered for his love of family, his country and all animals.

At Richard’s request, no formal service will be held. Cremation has taken place.

Memorials are preferred to Caring Edge Hospice or to an organization of the donor’s choice.