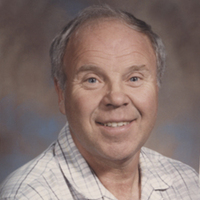 Wayne was born May 11, 1935 in Minot, the son of Glen and Sylvia (Clott) Emery. He was raised and educated in Minot and graduated from Minot High School in 1953. Wayne continued his education at Minot State College, where he majored in Mathematics and minored in Chemistry and Physics and received a Bachelor of Science degree in education. While at Minot State, he played on the tennis team and made it to the conference doubles finals with Jim Allen.  He later received a master’s degree in education from UND. He was once married to Elizabeth Ragazzo, with whom a daughter, DeLite and son, Kirt were born.

Wayne began his lengthy career in teaching, first at Jim Hill Jr High School in Minot, taught at various other North Dakota schools, prior to moving to teach in the Anaheim, CA area for over 34 years. It was here that he met Nina Logan and they were married on March 22, 1998.

After retiring, they returned to North Dakota and lived in Minot for a year before moving to Des Lacs, where they had since lived.  He enjoyed summers at the family cabin on Strawberry Lake that he owned with his father, Glen and now by his son, Kirt and his family.

Wayne was a member of the Seventh-Day Adventist Faith. He had taught skiing in North Dakota and California. He enjoyed watching sporting events, especially NFL games and NDSU football games.

Wayne was preceded in death by his parents and a daughter, DeLite.