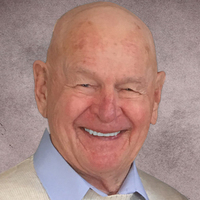 To view a livestream of the service access:  https://www.mtmsales.net/thomas

Dale was born August 2, 1929 in Sherwood, ND, the son of Thomas Henry and Carrie (Pierce) Marsland.

He graduated from Sherwood High School in 1949 and attended Minot State Teacher’s College where he was a member of AKD Fraternity and played coronet in the college band and the symphony orchestra. After enrolling in the ND National Guard, he fought at the front line in the Korean Conflict. Dale took great pride in serving our nation and was honorably discharged July, 1952.

After a chance meeting at the Mouse River Park, he met his future wife and life-long partner, Donna St. Croix, to whom he gave his full devotion. Dale and Donna were united in marriage of 69 years at the time of his passing. Together they made their home in Minot and raised their three children, Tom, Mike, and Jean. Dale’s heart belonged at the family home in the valley, which we refer to as “the farm.” He and Donna lived there for 45 years.

Dale was a business owner of multiple endeavors spanning each decade of his life. He owned a service station during the early years of raising children, started Marsland Realty and Construction, and developed an oil services business with his son Mike in which they invented the first mud vac used in the oil fields. After retirement, Dale enjoyed his role as one of the Mall Santa’s and especially his six years driving school bus for Nedrose. His bus was known as “the fun bus!”

Spending time at “Poppa” Dale’s was a must do for every grandchild as he and Grandma Donna hosted popcorn ball making during the holidays and any day each child knew he or she could count on the candy drawer being well stocked with treats of every kind, especially chocolate and of course there would be plenty of ice cream available for the asking! Dale also loved making fudge to share with shut-ins from his church and for multiple family members.

Dale was a constant support to Donna in her pastoral work with College Campus Ministries, which included multiple Mission trips to Mexico. He enjoyed volunteering with various groups including the St. Joseph’s Hospital Hospice Program, Hostfest, as an elder and leading bible study classes at the Presbyterian Church. He was a member of Cornerstone Presbyterian Church, and his faith was the core of who he was and was transformative in his life and in the lives of his family.