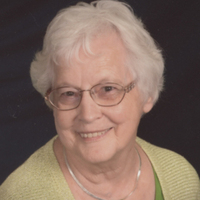 A delayed streaming of the service will be available Thursday, September 15th and can be accessed by going to: https://www.mtmsales.net/thomas

Dorothea was born December 20,1933 in New Baltimore, Pennsylvania, the 9th of 15 children to Cletus and Adelaide (Benning) Werner. She was raised and educated at Schellsburg, Pennsylvania and graduated from Schellsburg High School in 1952.  She was employed for Howard – Johnson Company and a bank in Schellsburg from 1952-1955.

Dot’s brother, Dan had brought home a Navy buddy from North Dakota, Ben Hoag, and introduced him to Dot. He became the love of her life. They were later married in New Baltimore, Pennsylvania on November 26, 1955. They moved to Fargo in December of 1955, where Ben finished his schooling at NDSU and she was employed with a bank there.

They moved to Minot in 1959, where Ben was employed at the North Central Experimental Research Center south of town. Along with raising their three children, Dorothea was employed for a time with JC Penney, The Flaky Crust and Center for Family Medicine. She was well known for her ability to sew countless outfits, dance costumes for her daughters, along with many blankets and quilts, which family members and friends received as gifts. In addition, she donated many of these items to the Dakota Boys and Girls Ranch and Dakota Hope Clinic. Ben died very suddenly on August 5,1993 from an allergic reaction.

Dorothea was a longtime member of Our Lady of Grace Catholic Church, Minot, where she filled numerous roles, including time as a Church secretary, CCD Director, Church decorator and sewed many of their Altar Cloths. Her faith was of utmost importance to her. She spent much time praying for her family and served on the Prayer Committee at the Church. She was an avid collector of angels, crosses and nativities.

Mass of Christian Burial: Wednesday, September 14, 2022 at 11:00 a.m. in Our Lady of Grace Catholic Church, Minot.  A delayed streaming of the service will be available Thursday, September 15th and can be accessed by going to: https://www.mtmsales.net/thomas
Interment: Rosehill Memorial Park, Minot
Visitation:   Tuesday September 13th from 5:00 p.m. to 7:00 p.m with a Vigil Prayer service on Tuesday at 7:00 p.m all in Thomas Family Funeral Home, Minot.
Memorials: preferred to the NDSU Ben Hoag Scholarship Fund or Our Lady of Grace Church.