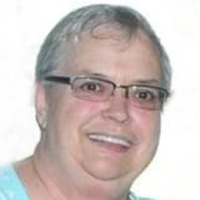 Lou was born on February 2, 1951 to Norman and Inga (Iverson) Rood in Bemidji, MN. She was raised in Ten Strike, MN for a short time and began her education in Blackduck, MN. Her family moved to East Grand Forks, MN, where she continued her education and graduated from East Grand Forks High School in 1969.

Lou married Jim Burns in 1970, to whom their son Jeff was born to in 1979. The couple later divorced.

Lou married Arnold B. Cariveau on July 8, 1982 at the Crookston, MN courthouse. To this union, Arnold brought his daughter, Shauna, from a previous marriage, and then adopted Jeff shortly thereafter.

Lou learned to sew from her mother at a young age, which became a life-long hobby. She had acquired several sewing machines over the course of her life. Her passion for sewing lead her to operating a sewing and embroidery business with her husband and son. Lou also loved to crochet and handcrafted many beautiful doilies. Additionally, she was employed by the Traverse County Sheriff’s Department as a 911 operator. She retired in 2017.

Lou and Arnold’s special memories included traveling southern Minnesota in their three-wheel motorcycles. They sought out area church suppers and often attended those along their motorcycle trips.

Lou was known for her “green thumb.” She enjoyed gardening and she and Arnold had a large garden while living in Grand Forks on Omega Avenue. Most recently they enjoyed smaller-scale gardening and being surrounded by the many plants she cared for in their apartment. In 2019, they moved to Minot to be nearer their daughter.

She was preceded in death by her parents.

A memorial service will take place at a later date in East Grand Forks.