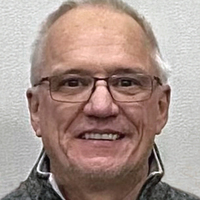 Larry Wayne Johnson, 65, of Minot, ND, died Monday, August 8, 2022, in a Minot hospital with his loving family surrounding him.

Larry was born on May 23, 1957, in Kenmare, ND, to LeRoy and Lorna (Rasmusson) Johnson.  He was raised in Minot with his sister, Carol, and brother, Wayne.  Larry graduated from Minot High School and earned an Associate Degree in electrical technology from the ND State School of Science.  After college, he worked in Minnesota.  Larry then returned to Minot and worked as an electrician.  He began working at Burlington Northern Sante Fe (BNSF) in the Signals Department in 1989.  He retired from BNSF in 2021.

Larry was united in marriage with Teri Ostdahl in 1994.  Larry and Teri began their family by welcoming their son, Drew, and two years later, their son, Lucas.  You could not find more loving parents.  Teri passed away unexpectedly in 1997.  With the help of his parents and in-laws, Larry raised Drew and Lucas to be the loving and fine young men they are today.  Larry was involved in all of Drew and Lucas’ activities, whether it be school, sports or other extracurricular activities.  His children’s accomplishments made him very proud.  Nothing was more important to Larry than his sons.  He was a devoted father.

In 2020, Larry and Becky Hillerud were married.  Along with Becky, Larry acquired a large family of people who loved him and welcomed him into their lives.  Larry was an important part of family gatherings, holidays, and vacations to Mexico.

Larry thoroughly enjoyed the time he spent visiting and socializing with family and friends.  The time he spent sailing with his friend, Tom, was also special.  If he could lend a helping hand to anyone, he was more than willing to do so.  Larry will be missed, respected, and loved for the person he was.  We will cherish the precious memories we have.

A private service will be held at Thomas Family Funeral Home, Minot.
A time of sharing memories for family and friends will be held on Tuesday, August 16, 2022 from 2:00 p.m. to 4:00 p.m. in Thomas Family Funeral Home, Minot.
Memorials are preferred to the Pulmonary Fibrosis Foundation, 230 E. Ohio Street, Suite 500, Chicago, IL 60611, or a charity of the donor’s choice.