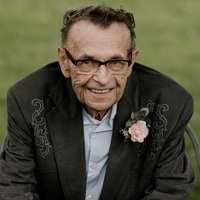 To view a livestream of the service access: https://www.cornerstoneminot.com/watch

Roger was born September 14, 1936, in Butte, ND, the son of Paul and Mary (Demchuk) Plesuk. He was raised and educated in Butte, graduating from Butte High School in 1953. He assisted on the family farmstead in Dogden Township of McLean County until 1968.

Roger was united in marriage to Betty Person on November 27, 1957, in Casselton, ND. They made their home in Dogden Township until moving to Minot in 1968. There, he learned the trade of installing floorcoverings and worked with various stores, including Sebby’s Carpeteria, Tollefson’s Carpetland and I.Keating Furniture World. In his later years, he enjoyed his position as grounds keeper for Apple Grove Golf Course until 2011. He could also be found helping out at Northern Auction.

Roger’s greatest passion was collecting farm toys. He traveled with Betty to many shows, near and far, and was well known for his collection… buying and selling “Roger’s Toys”. He restored many kid pedal tractors with trailers as well as a few full size antique tractors. He loved gardening and canning. Somehow always growing the best tomatoes. Roger’s soups were second to none.

Betty passed away on July 11, 2003. Roger continued to live in Minot and was most recently residing at Edgewood Vista.

Service to Celebrate the Life of Roger Plesuk: 1:30 p.m. Thursday, August 4, 2022 at Cornerstone Presbyterian Church, Minot. To view a livestream of the service access: https://www.cornerstoneminot.com/watch
Interment: Butte Cemetery, Butte, ND at approximately 4:45 pm
Visitation will be held one hour prior to the start of the service at the church on Thursday.