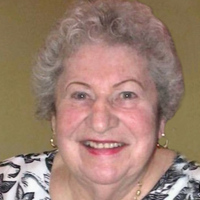 Franceen was born on December 22, 1927 at Kotash, Austria, the daughter of Leon and Adela (Insler) Kornbluh. At the age of 3, she escaped the country with her father, mother and sister on a ship that later docked in Montreal, Quebec. The family was later able to enter the United States and reunite with other family members in New York when she was 16 years old.

Franceen met her forever love, William “Bill” Glick on Coney Island, while he was stationed with the military in New York. They were married six months later in 1947 and lived for a short time in Chicago before moving to Foxholm, ND. This was quite a life move for a Jewish girl from New York.

Bill died December 9, 1991. Franceen continued to live in Minot until most recently becoming a resident of the Souris Valley Care Center in Velva, for which the family is forever grateful for the care she received.

Franceen was preceded in death by her parents, husband of 44 years, Bill; sons in law, Harold Stansill and Rand Kay; sister, Gail Schnall.

Interment: There will be a Private Family Graveside Service at Rosehill Memorial Park, Minot.