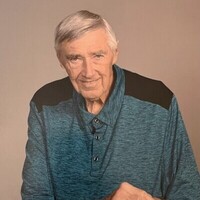 To view a livestream of the service access https://www.facebook.com/Zion-Carpio-Lutheran-Churches-111092798991830/

Arthur Glen Johnson Jr. was born on February 9, 1936 in Burlington, ND to Arthur and Olava Johnson. He was raised on a farm near Coulee, ND and began his education in a one room country school. The family moved to a farm near Hartland and he completed elementary school in Hartland. Glen graduated from Dakota Lutheran Academy High School in Minot, ND in 1954 and he earned his bachelor’s degree from Pacific Lutheran University in Parkland, WA in 1959.

Glen and his brother Curt assumed control of the family farm in 1959 and operated the farm for the next 7 years. During that time, Glen also served in the US Army, during the Berlin Crisis, as a medic and taught high school social studies at Des Lacs, ND. Then, he earned his master’s degree in Agricultural Economics from North Dakota State University and began his career with the Soil Conservation Service as a trainee in the West Region Technical Center. He transferred to Casper, Wyoming as the State Economist and then to the Washington State office as Watershed Planning Leader and served the West Region Technical Center as Regional Economist for thirteen western states.

Glen met Linda, who would become his wife, through a mutual friend in California while working in Vancouver, Washington. He adopted two of her sons, Paul Johnson and Mark Albimino. The family lived in Vancouver, WA.  In 1976 he was promoted to the National Headquarters of the Soil Conservation Service in Washington D.C. where he served as the National Economist for the Watershed Division. Glen and Linda divorced in 1977.  Later, Glen transferred to the Watershed Planning Staff from which he retired in 1986.

Following retirement, Glen enjoyed living at Lake Anna, Virginia and was a part-time real estate agent. He moved to Sebring, FL in 1990 and spent winters there and summers on his farm near Hartland.  More recently, he spent the winter months in Mesa, AZ where he purchased a home in the Fountain of the Sun Resort.

Glen was a member of the Carpio Lutheran Church, Donnybrook American Legion and the Epiphany of Christ Lutheran Church- Apache Junction, AZ. He especially enjoyed studying the genealogy of his family and attending the gatherings of family and friends. He also enjoyed time spent in Bible Studies and exploring historical and tourist sites in Arizona and North Dakota and visiting regional zoos with the Faul family.

He was preceded in death by his parents:  Arthur and Olava Johnson; brother Curtis Johnson and grandson Brandon Johnson.

Celebration of the Life of Glen Johnson:  Monday, June 6, 2022, at 11:00 a.m. in the Carpio Lutheran Church. To view a livestream of the service access https://www.facebook.com/Zion-Carpio-Lutheran-Churches-111092798991830/
Interment will be at the Bethlehem Lutheran Cemetery- rural Coulee.
Visitation:  Sunday from 1:00 p.m. to 3:00 p.m. in Thomas Family Funeral Home – Minot.
Memorials are preferred to the Carpio Lutheran Church or Parkinson’s Foundation in memory of Glen’s mother Olava Johnson.