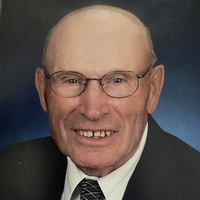 A livestream of the service can be viewed by accessing www.firstlutheran.tv

John was born on January 20, 1921 at Truro, Iowa. After graduation from high school, he joined a threshing crew in western North Dakota, then returned to Iowa where he picked about 4,000 bushels (of corn) by hand. John recalled when he first started picking corn, they got two to three cents a bushel and later got a nickel. John was drafted into the Army in 1942. He landed at LeHavre in 1945 at “Camp Luckystrike” –they named camps at that time after cigarettes. Prior to deployment, he was an instructor dealing with fuses and igniters on the various enemy mines. John claimed his unit never lost a vehicle to mines when they went to combat.

Before deployment to Europe during World War II, John married Olive Johansen on August 9, 1944, a Ryder native who died in 2005. They had two children, Jerry (Cheryl), Alexandria, VA, who achieved the rank of threestar general in the Army and Lois Sinn Lindquist (R. Robert), a business woman who retired to Montana.

John farmed in the Ryder area with his father-in-law the first year after WWII. He enjoyed carpenter work on his own until 1957, when he joined the Army Corps of Engineers and stayed with them until 1989. John’s last posting was at the Minot Air Force Base. Additionally, he was with the Army National Guard retiring as Command Sgt Major. He stayed in Minot after retiring and spent 30 years plus of volunteering at the Scandinavian Heritage Park, as well as the Minot Commission on Aging, First Lutheran Church, AARP, Golden K, plus. He averaged about 1,000 hours a year or better in this volunteer work.

If asked, John would give his four great grandchildren this advice: “I’d say you have got to have the education to find yourself a good job. You should live a pretty clean, healthful life, and be able to later on in your life, give back to the community. Why, “the community will be pretty good to you, so you have an obligation in my estimation to help other people”. Last year at age 100, John claimed he stayed active and took care of himself physically . . . walking at least two miles a day along with upper body work. John is survived by his sister, Donna, two children, two grandchildren (Jacob and Andrew) and four greatgrandchildren (Levi, Brooklyn, Anna Marie and Olivia.)

Celebration of Life service: Wednesday, May 18, 2022 at 11:00 a.m. in First Lutheran Church, Minot. A livestream of the service can be viewed by accessing www.firstlutheran.tv
Interment: ND Veterans Cemetery, rural Mandan, ND
Visitation: Tuesday, May 17, 2022 from 4:00-6:00 p.m. in Thomas Family Funeral Home, Minot.
Memorials: preferred to the Scandinavian Heritage Association and/or First Lutheran Church.