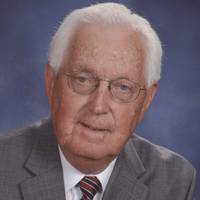 A livestream of the service will be available by accessing https://vincentumc.com/watch

Rod Romine, 89, of Minot, died peacefully on Wednesday, March 30, 2022, in a Minot hospital with his daughters by his side.  He suffered a massive stroke two days before he passed away.

Rodney Lee Romine was born on May 23, 1932, in Rugby, ND to Eugene and Hilma (Ellertson) Romine.  He graduated from Rugby High School in 1950 and married his high school sweetheart, Gladyce “Happy” Williams on June 17, 1951 at the Rugby Methodist Church.

He graduated from Brown Institute in Minneapolis, MN.  He worked at KEYZ Radio in Williston ND until enlisting in the Army in March of 1952.  He served in Korea until March of 1954.

Rod was a staff announcer and later sports director at KCJB Radio and KCJB TV (later KXMC) starting in May 1954 and later became involved in management of the two stations.   He was elected President of the ND Broadcaster Association in 1988.  He received the Pioneer Broadcaster Award in 1994 and retired as manager of Reiten Broadcasting in 1994.

Rod was a member of Vincent United Methodist Church for over 60 years where he was active on several committees, sang in the choir until his passing, and was the “coffee guy” for funerals and church bazaars.

Rod was a member of the Beaver Booster Club since its inception in 1958.  He was also a charter member of the MSU Board of Regents.  He received the MSU Alumni Golden Award for fund raising for the first all-weather track at the college field.  He received the CP Lura Award in 1983 for chairing the state-wide committee to gain university status for Minot State.  He is credited with helping to establish the MSU Athletic Hall of Fame where he was later inducted in 1993.   He received an honorary degree from MSU at the commencement ceremony in May of 2014.

He was the starter for all MSU and MHS track meets for 25 years and later was inducted in the ND Track & Field Hall of Fame in 2017.  He is also in the Minot High School Hall of Fame for his work broadcasting at sporting events.  He served on the Board of Directors at First Western Bank and Center Mutual Insurance in Rugby, ND.  He was a member of the Elks, Minot Country Club and Rotary for several years.  He was one of the founding members of the Cameron Indoor Tennis Club in Minot.

He was preceded in death by his parents, and siblings: Perry Romine, June (Allie) Gilleshammer, Homer (Doris) Romine.

Celebration of the Life of Rod Romine:  Thursday, April 7, 2022 at 11:00 a.m. in Vincent United Methodist Church – Minot. A livestream of the service will be available by accessing https://vincentumc.com/watch
Interment will be in the North Dakota Veterans Cemetery.
Visitation:  Wednesday from 4:00 p.m. to 6:00 p.m. in Thomas Family Funeral Home – Minot.
In lieu of flowers, memorials are preferred to the Vincent Methodist Church Foundation or MSU Rod & Happy Romine Scholarship fund.