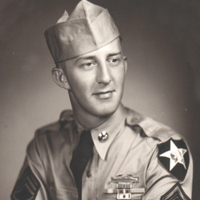 Duane Wesley Aase was born on October 25, 1931 on a farm near Kathryn, ND to Alfred and Olga (Olstad) Aase. He was raised on the family farm and attended rural schools prior to graduating from Fingal High School. Duane was drafted into the U.S. Army on August 20, 1952 and served as a radioman in Korea prior to his honorable discharge as Tech Sergeant in the Headquarters Company of the 1st Battalion of the 23rd INFANTRY Regiment APO 248.  He received his honorable discharge on June 30, 1954. Duane was a recipient of the Korean Service Medal with two Bronze Service Stars, United Nations Service Medal, Republic of Korea Presidential Unit Citation, National Defense Service Medal and Bronze Star Medal. Following his discharge, he returned to North Dakota and enrolled at the North Dakota State School of Science in Wahpeton where he received specialized training in electronics engineering for two years. Duane moved to Minot in 1957 when he accepted a position with KCJB Radio. He transitioned to KXMC TV when the television station was established.

Duane married Barbara Berg on October 4, 1958 at Bethany Lutheran Church in Minot. They made their home in Minot and had resided at 914 15 ½ Ave. S.W. since 1961. Duane was employed at KXMC TV for forty-one years prior to his retirement in 1997.

Duane was a member of Bethany Lutheran Church, Sons of Norway, Scandinavian Heritage Association, Elks, American Legion, V.F.W., and Golden K Kiwanis Club. He was an active volunteer at the Scandinavian Heritage Park and at the Norsk Hostfest where he could often be found tending the coffee booth. He especially enjoyed crossword puzzles, hunting and fishing, cross country skiing, bicycle riding, walking, chip carving and was a HAM radio operator.

Duane was preceded in death by his parents, and siblings: Jeanne (Don) Kapaun and Don (Inez/Carol) Aus.

Celebration of the Life of Duane Aase with Military Honors on May 20, 2022 at 1:00 p.m. in Bethany Lutheran Church, Minot.

Interment will be in the North Dakota Veterans Cemetery, rural Mandan on May 23, 2022.

Memorials are preferred to Bethany Lutheran Church or the Scandinavian Heritage Association both of Minot.