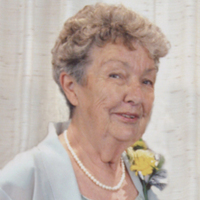 Dorothy Hilda Lee was born on February 23, 1929 in Sanborn, Iowa to John and Bertha (Kylstra) Verwoest. She was raised and educated in Fosston, Minnesota and graduated from Fosston High School in 1947. She continued her education at a nursing school in Crookston, MN and became a licensed practical nurse. She was employed in that capacity for five years in Minnesota and Texas.

Dorothy married George Lee on December 1, 1956 in Two Harbors, MN and they made their home in northern Minnesota. They moved to Minot in 1959, when George’s job as a crane operator brought him to this area. The family moved to Burlington in 1962 and Dorothy was a fulltime wife, mother and homemaker. She was employed as a correctional officer at the Ward County Jail from 1985 until 1994. She was employed for a short time at the Roosevelt Park Zoo in the ticket booth and later at Herberger’s in Dakota Square Mall. George died April 26, 1997. Dorothy had continued to reside in Burlington until she moved to the Elison Assisted Living Center in 2018.

Dorothy’s loving family includes her son: Michael (Tammy) Lee of Burlington and several nieces, nephews and cousins. She was preceded in death by her parents, husband and siblings: John, Fritz, Henry and Nelica.