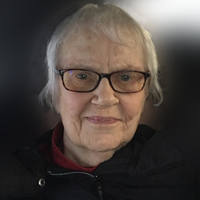 A livestream of the service will be available by accessing https://vincentumc.com/watch

Dolores was born in Berthold, North Dakota, June 4, 1928, to parents Claude and Ruby (Bergo) Huff. Dolores was raised on the family farm at Donnybrook, North Dakota. Dolores was the fifth of ten siblings. She graduated from Donnybrook High School in 1946 and attended Minot State University. Dolores taught school at McKinley Elementary School in Minot, Powers Lake Elementary School, and Stanley Elementary School. Later in life, Dolores started the first kindergarten program in Stanley, which she enjoyed for many years. She continued with this private kindergarten program until kindergarten became public through the Stanley school system. She also spent many years teaching Sunday school and Bible school.

Over the past years, she was a member of Zion Lutheran Church (Lunds Valley), American Lutheran Church and Our Saviors Free Lutheran Church (Stanley), and currently Vincent Methodist Church (Minot). Her Christian faith was of great importance and significance to her, which she pursued throughout her life.

Dolores always had a special love for children, which was very evident throughout her lifetime. Posted on her fridge was a clipping that read “One hundred years from now it will not matter what kind of house I lived in, how much money I had, nor what my clothes were like. But the world may be a little better because I was important in the life of a child.”

Dolores married Warren Paulson on August 3, 1952, at Vincent Methodist Church in Minot. They began their married life on the Paulson family farm at Lunds Valley, which Warren and Dolores previously purchased from Warren’s father, Henry Paulson. Together, they raised five children and greatly loved their 11 grandchildren and 12 great grandchildren. Warren passed away in June of 2011.

Following retirement, Dolores and Warren purchased a home in Minot. She enjoyed her part-time position at Market Place serving food samples and visiting with the customers. She also had a spring & summer position at Dakota Garden Center in their green house. She enjoyed working alongside her oldest grandchild, Michael, who also worked at the same green house.

In March of 2012, Dolores moved to Williston where she lived at Arbor House assisted living until May of 2021. Due to declining health, she moved to Sunset Prospera nursing home in Mandan, on June 3, 2021, until she passed.

Dolores will always be admired for her dedication, devotion, and love for her family. Her wit, humor, and graciousness will be remembered by all who were fortunate enough to have known her. She was one in a million and will be greatly missed by all.

The family would like to thank the staff members at both the Arbor House assisted living in Williston, and at Sunset Prospera nursing home in Mandan for caring for our mother.

Celebration of Life for Dolores Paulson:  2:00 p.m. Saturday, February 26, 2022 at Vincent United Methodist Church, Minot. A livestream of the service will be available by accessing https://vincentumc.com/watch
Interment:  Sunset Memorial Gardens, Minot.
Visitation will be held one hour prior to the start of the service at the church.