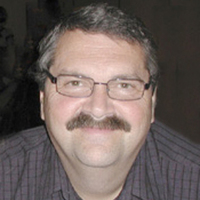 To view a recorded stream of the service access: https://www.mtmsales.net/thomas

Richard Anhorn, 67, Minot and formerly of Harvey died on Tuesday, January 25, 2022 in a Minot hospital from complications related to kidney disease.

Richard Allen Anhorn was born on November 30, 1954 in Harvey, ND to Erven and Inez (Thon) Anhorn. He was raised and educated in Harvey and graduated from Harvey High School in 1972. He continued his education at Minot State University and graduated with a degree in music education.  Later, he received his Master’s Degree.

Rich was a music teacher at Des Lacs-Burlington High School, McClusky High School and Minot High School from 1979 – 1989. Later, he was employed by Nu-Grain Technologies in Harvey from 1989 to 1999 and as marketing and ticketing director of the Norsk Hostfest from 2001 to 2011.

Rich was a member of the Music Educators National Conference, Phi Mu Alpha Sinfonia, a national music fraternity as well as the Minot and North Dakota Education Associations and the Moose Lodge. He especially enjoyed music, reading hunting, fishing, and loved spending time with his grandchildren.

Celebration of the Life of Richard Anhorn: Saturday, January 29, 2022 at 11:00 a.m. in the Thomas Family Funeral Home Chapel – Minot, with fellowship to follow at the Minot Moose Lodge. To view a recorded stream of the service access: https://www.mtmsales.net/thomas
Visitation:  Friday, January 28th from 5:00 p.m. to 7:00 p.m. in Thomas Family Funeral Home – Minot.
Memorials are preferred to Souris Basin Transportation.