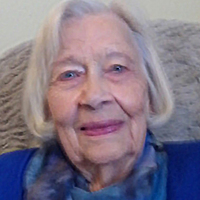 Naomi was born on March 19, 1923 in Woodworth, North Dakota, the daughter of Herbert and Lora (Smith) Brown. Being the youngest in the family of a Methodist minister, her family was moved to various small towns in ND until settling in Rugby where she graduated as valedictorian from Rugby High School in 1941. Naomi was united in marriage to Marvin Modrow on October 26, 1941 in Rugby. They made their home there until moving to Devils Lake in 1967, where they resided until Marvin’s death on December 30, 2006. They had been the “perfect couple” through 65 years of marriage.

Along with raising their 5 children, Naomi gave piano lessons, worked with special needs children, and then was employed as a Home Healthcare aide for Ramsey County Social Services for over 21 years. She was an active member of the Methodist Churches in Rugby and Devils Lake, being the church pianist/organist and taking a lead in their Circle groups and Bible studies. In her spare time, she also enjoyed reading, cooking, baking, playing piano, knitting and entertaining family and friends.