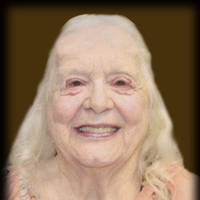 Dorothy Marie was born on May 13, 1935, in Minot to Emil and Martha (Stamen) Ahmann. She was raised and educated in Foxholm until the age of 14, when she began school at St. Leo’s High School of Minot. She graduated from there in 1953.

After finishing high school, Dorothy was employed in Minot as a waitress at both the Uptown Nook and at the La Plaza Café. In September of 1955, Dorothy entered in active duty service with the U.S Army. She served her country until receiving her honorable discharge in September of 1958.She returned to Minot where she married Jack Clayton. They were blessed with three children, David, Allen, and Janice. The couple would later divorce.

Dorothy was a member of St. Leo’s Catholic Church, Minot, the Harmony Center and the local Senior Citizen group. She held many hobbies throughout her life, which included scrapbooking and playing Bingo. However, one of her greatest joys was spending time with her grandchildren.

Those who preceded her in death were her parents; brothers, Larry and Daniel Ahmann; twin-brother, Donald and a brother-in-law, Bud Slavick.