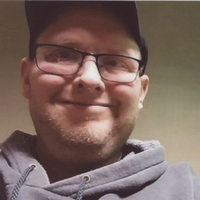 Dan was born on January 8, 1981 at Dodge City, Kansas, the son of John and Carol (Underwood) Locy. He moved with his mother and sister to Williston in his teen years. He then moved to Minot in 1999 and graduated from Minot High School in 2001.

Dan was employed with the Kiser Family for Night Hawk Security as a security guard for nearly 20 years.

In his spare time, Dan enjoyed watching movies, going for walks at the Dakota Square Mall and caring for his cat, Bee. He had a special relationship with his grandmother, Betty Locy until her death and had many friends.

Dan is survived by, his mother, Carol of Mandan, ND; sister, Alicia (Mike) Bauer, Williston, along with several aunts and uncles. He felt as if the Kiser family, including, Terry, Sheila, Chris and Josh Kiser were part his family.

Dan was preceded in death by his father, John Locy; grandparents, John Paul and Betty Locy, Sarah and Kniffen Underwood; along with a number of aunts and uncles.

At his request there will not be a viewing or visitation.