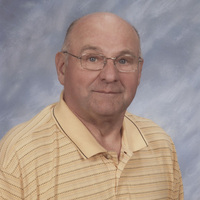 Tommy was born October 30, 1944, in Rolette, ND, to Norvin and Clara (Monson) Peterson. He was raised on the family farm near Mylo and attended school in Rolette, graduating from Rolette High School in 1963. On January 15, 1964, Tommy married Mildred Abercrombie in Bisbee, ND, at the Bisbee Lutheran Church.

They made their home on a farm in Island Lake Township near Mylo where they farmed, ranched, and grew their family, which included three children, Maynard, Chris and Cindy. Tommy grew small grains and ran a dairy operation for several years, eventually he sold his dairy cattle and switched to raising Angus-Charolais cross. The farm operation ceased in the mid-1990s when Tommy went to work at the Rolette elevator until his retirement in the late 2000’s. Mildred died in September of 2008.

Tommy would not pass an opportunity up to talk about farming and ranching which were his life’s works and hobbies. He loved going to breakfast each Saturday with his friends and enjoyed spending time with his grandkids.

Tommy was preceded in death by his wife and parents.

Memorials are preferred to the Wolford Lutheran Church or the Rolette American Legion Post.