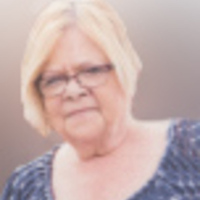 Deborah Scheer was born in Minot, ND the daughter of Spencer and Erma (Jones) Scheer on August 5, 1951. She was raised in the Parshall community and graduated from PHS in 1969. She attended Minot State Teacher College for a brief time and was united in marriage to Bruce Clyde in Parshall in June of 1970. Together they made their home in Parshall and raised a son, Shawn.

While in Parshall, Deborah worked in the dietary department at the Rockview Good Samaritan Center; a position she held for many years.

In 1987, she moved to New Mexico and headed the dietary department at another Good Samaritan Care facility until returning to North Dakota in 2001, at which time, taking a position as facility dietitian at Missouri Slope Lutheran Care Center in Bismarck. In 2018, she traded her love for caring for others, for caring for flowers and shrubs. In the summer months she worked for Dan and Jerry’s Greenhouse at the Mandan Runnings Hardware Store. She had a green thumb and a passion for her many customers. In the winter months as a sales clerk at Runnings up until she recently became Ill.

Deborah was being cared for by her son, Shawn and daughter-in-law, Lana, at their home in Douglas, ND these past months.

In her spare time, Deborah enjoyed baking, cake decorating and trying new and interesting recipes to share with family and friends. She tried her luck fishing often, but more importantly, spending time with her Son and family on the waters. She enjoyed spending time with “Harley” a five-year-old Golden retriever she raised from a puppy.

Deborah is survived by her Son, Shawn (Lana) Clyde and their daughter, Makayla, all of Douglas, ND and two sisters; Dorothy Wood, Mandan, ND, and Kathy Allard, New Rockford, ND.

She was preceded in death by her parents, and a brother, Robert Scheer.

A Celebration of Deborah’s life and gathering of family and friends will be held 11 AM Monday, November 22, 2021 at the Bismarck Eagles Lodge. All are invited to come.