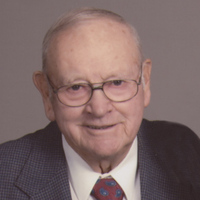 To view a livestream of the service access: https://www.facebook.com/pg/breadoflifeminot/videos/?ref=page_internal

Gene was born on March 27, 1931, in Minot the son of William and Helen (Davis) Groninger. He was raised on a farm in Burlington Township of Ward County, North Dakota, near Des Lacs. The family moved to a farm west of Minot in Harrison Township and Gene graduated from Minot Model High School in 1950. Known to many, Gene was a starter on Minot Model’s very successful basketball teams that went on to win State Class B Championships in 1947, 1948 and 1950.

Gene entered active-duty service with the U.S. Army and honorably served his country from 1952-1954 during the Korean Conflict. After receiving his honorable discharge, he returned to Minot and enrolled at Minot State College, where he participated on the basketball team that went on to the National NAIA under the direction of Coach Herb Parker. That team would later be inducted into the Minot State Hall of Fame in 1988. Gene was named to the All-Conference Team and later was also inducted into the MSC Hall of Fame.  He was active later with North Dakota Amateur Basketball and was also inducted into their ND Hall of Fame.

Gene was united in marriage to Isabel Narum on June 16, 1956, at Trinity Lutheran Church in Douglas. They made their home on a farm west of Minot, along the Souris River for five years. In 1961, they purchased a farm in Spring Lake Township north of Douglas. Along with raising their five children, they grew small grains and raised cattle. He enjoyed all facets of the farm from working the soil to time raising his cattle. After retiring, he and Isabel continued to live on the farm until October of 2019, when they moved to the Souris Valley Care Center in Velva. His sons, Dwayne and Darren, have taken over the operation of the farmstead.  Gene was a longtime member of Trinity Lutheran Church in Douglas.