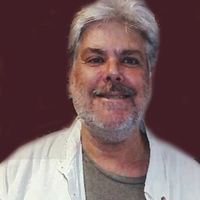 Brian was born October 14, 1965, in Grand Forks, ND and adopted at 15 months by his parents Robert and Margueritte (Haider) Nass.

He grew up in Dickinson, ND where his father worked as a police officer. Brian graduated from Dickinson High School in 1982 and continued his education in Wahpeton, ND at the ND State School of Science.

Brian enlisted into the US Navy serving his country until his father’s death in 1985. He returned to Dickinson and joined the working world, first at Pizza Hut and then as a delivery driver for Conlins Furniture. Following a work injury, Brian moved to Burlington, ND to be near his mother, Margie and her family.

Brian enjoyed reading and computers. He treasured the time he spent fishing with his father as a child and Margie will forever miss her very good son.

Brian is survived by his mom, Margie of Burlington, sister Nancy and a nephew Robert, Godfather Robert Haider and many aunts, uncles, and cousins.

Brian was preceded in death by his father, Robert Nass, Godmother, Esther Haider and grandparents Michael and Margueritte Haider and Wallace and Cecilia Nass.

A private graveside service will be held in the Burlington Community Cemetery in the Spring of 2022.