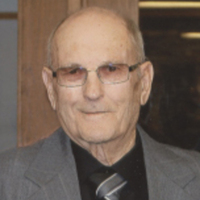 Robert Herzog, 95, Minot and formerly of Benedict died on Wednesday, August 25, 2021 in his home with his family at his side and under the care of Trinity Hospice.

Robert LeRoy Herzog was born on July 5, 1926 in Logan, North Dakota to Flora Herzog.  He was raised by Jake and Anna Karpenko on a farm near Benedict and attended rural school.  As a young adult he assisted on the family farm.

Robert married Frances Schoenberg on June 22, 1943 in St. Paul, MN.  They made their home in the Benedict area.  They moved to Minot in 1960 when Robert became a truck driver for GTA Feeds.  He was very proud to have received several safe driving awards.  Frances died on March 7, 1984.  Robert retired in 1988.

Robert married Faye Kalabza Hatlestad on July 8, 1995 at Our Savior Lutheran Church in Max, ND.  They made their home in Minot.  Faye died on February 8, 2013.  Robert had continued to reside in Minot.

Robert was a member of Our Savior Lutheran Church -Minot and had been the caretaker/sexton of the Methodist Cemetery- Benedict.  Also, he was a former member of the Moose Lodge and Eagles Aerie both in Minot.  He especially enjoyed gardening and was a “jack-of-all trades” when it came to helping others.

Robert was preceded in death by his parents, wives: Frances and Faye, sister: Janice King and stepson: Gary Hatlestad.