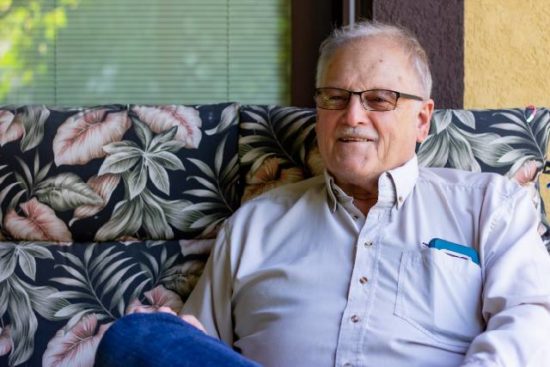 Thomas Kambeitz, 79, passed away after a strenuous and courageous battle with the Covid virus on Friday November 27, 2020. He was a rock throughout it all for his family and his faith held him up.
Tom was born on August 15, 1941, the first of eight children born to Wendell and Elizabeth Kambeitz in rural Napoleon. He grew up on the family farm in Napoleon and in his youth he worked on the farm and then again as an adult. As a young adult he attended school in Minneapolis, MN at Humboldt Institute and then years later attended the American Institute of Engineering and Technology in Chicago.
After attending Humboldt Tom accepted a position in Chicago Illinois for the Burlington Northern Railroad for 3 years. He was introduced to the love of his life, his wife of 57 years, Patricia Brezinski by his then roommate John Brezinski. They went out on a double blind date with John and Rose and both couples eventually married. After their engagement, Tom decided to return to farming and the newly married couple moved to Napoleon ND in 1963.
Tom farmed in Napoleon for eight years with land that he rented and also with his father Wendell. He eventually started Kambeitz Refrigeration in Napoleon shortly before he moved to Bismarck and started Capitol Refrigeration. He later purchased Bismarck Refrigeration and eventually expanded into Bismarck Heating and Air, Inc. He was quite the entrepreneur and also started Taylor Dakota Distributors and New Vision Security. He worked many long hours both with farming and with his businesses. Tom was a member of the Knights of Columbus.
He was a determined and hard worker and above all ethical and honest. He became very successful due to these traits. He was so fair and generous with clients that he quickly built a loyal client base always going above and beyond. At 79 he was still not retired and the employees of Bismarck Heating and Air continually rely on his vast experience and ability to problem solve on a daily basis even while initially hospitalized.
He was a wonderful family man and loved spending time with his 7 siblings, 3 kids and 6 grandkids and 2 great-grandchildren. Basically anyone could call him at anytime and rely on his support. His life revolved around kindness and helping others as well as having a sense of humor. He enjoyed telling stories to entertain others and wanted to make others laugh. His deep faith in God kept him sane during his isolation for two weeks while on the Covid unit in Fargo. He was a patient and loving man and his last wish was that we all would all hug and love one another. Tom made the world a much better place with his gentle nature and vibrant spirit and had limitless passion to protect others.
Tom is survived by his wife Pat, his 3 children, Karen (Dave) Gayton, Bismarck, Tom Kambeitz, Bismarck, Mike (Denise) Kambeitz, Bismarck; 6 grandchildren, Chris (Hillary) Kambeitz, Cassondra Kambeitz, Ashley Gayton, Brooke Gayton, Syd Gayton, and Alex Kambeitz; 2 great-grandchildren, Xavier and Leo Kambeitz and two brothers, Philip (Clara) Kambeitz of Bismarck and Kenneth (Felicia) Kambeitz of Santa Fe, NM and 4 sisters, Mary Ann (Paul) Daly of Valentines, Va, Elizabeth (Dennis) Kost, Washburn, Sandra (MIke) Kienzle, Bismarck, Cynthia (Allan Sveund) Kambeitz, Bismarck; and his sister and brother in-law Penny and John Wronski, Illinois and many cherished nieces and nephews.
He was preceded in death by his parents; his sister Lucia Gray, his brother in-law Rich Gray, and nephew Steven Gray.
Tom was so devoted to his wife and family and will forever be in our hearts. There honestly was never a more undeserving person to die in this way.