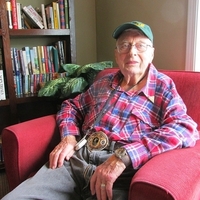 He was a Husband, Father, Grandfather, Great-Grandfather. We are deeply saddened by the passing of Henry Weyburn Niewoehner, 89 years, of Upham on Friday, January 13, 2023.

Born to Henry A. Niewoehner and Alma Erdman April 26, 1933, on the Erdman family ranch in rural Upham. Weyburn grew up on the Niewoehner family farm in Deep River Township rural Upham. He attended Pratt Township one room school.  He graduated from Upham High School in 1951. Weyburn was a member of the Walther League and taught Sunday School. After high school, he attended Minot State Teachers College for two years where he met Mae C. Parker in Biology class. Mae regularly commented that they were, “biologically attracted.” While in school, he was a member of the Alpha Kappa Delta Fraternity. Then, he attended Worsham School of Mortuary Science, Chicago, IL, and graduated in June of 1957.

Mae and Weyburn were married at St. Paul’s Lutheran Church, in Minot on July 6, 1957.

From 1960 until 2004 Weyburn and Mae, along with their children and occasionally grandchildren, as unofficial employees, ran the Niewoehner Funeral Home and Ambulance Service in Rolla. The business expanded to chapels in Rolette and Belcourt, ND and to a monument service.

Weyburn was active in the Rolla Volunteer Fire Department, the Rolla Curling Club, the Rolla Flying Club and the Borderland Auto Club. He attended car shows that were held at the International Peace Gardens. Weyburn and Mae were members of Immanuel Lutheran Church in Rolla and Bethlehem Lutheran in Upham.

Originally during college years and later as alumni, Mae and Weyburn sang in the choir of the Minot State University annual presentation of Handel’s Messiah.

With instruction from his good friend Leonard Krech of Rolla, on February 24, 1966, he was issued a Student Pilot Certificate and then his Private Pilot Certificate on March 27, 1968. Many family trips were made in airplanes, including the Rolla Flying Club Cessna Cardinal, to places like Chicago, IL; Boulder, CO; Miles City, MT; Devils Lake, ND; and the International Peace Gardens. He became a member of the Flying Funeral Directors of America. Weyburn reported to the FFDA that his son Mark’s first official act as a Flight Instructor was to give him a Biennial Flight review.  With Instruction from Gordon Krech, Weyburn was at the controls of that same Cessna Cardinal for a central ND flight on December 11, 2019. Family camping trips were made to the International Peace Gardens using an International Travelall in lieu of a tent, and meals cooked on a two-burner gas stove.

Weyburn was an active member in the Minot Elks and played his clarinet in the Minot Elks Band for 15 years. He enjoyed membership in the Eagles and the Beer Can Collectors of America. One family trip was even to a Beer “Canvention” in Cincinnati. Later family trips began to be associated with grandchildren, births, baptisms, graduations, and just for visits.

Since 1963 he was an active Kiwanis member in Rolla, Bottineau, and Minot. He served as Inter-Club Chairman and as Regional Vice President for several years. Weyburn was more recently involved in Minot’s Golden K Kiwanis organization. He served as a Trustee with the ND Cowboy Hall of Fame.

Weyburn and his wife Mae volunteered at the Minot Railroad Museum and on the Board of Directors. He and Mae ran the Roosevelt Park Zoo Train for many years until the park flooded. Weyburn drove the train as Engineer and Mae took tickets as the Conductor. In 2022 Weyburn reached a milestone of 65 years as a licensed Funeral Director.

He is preceded in death by his wife Mae and his parents.

Visitation & Viewing: Thursday, January 19th from 4:00-6:00 p.m. with a Prayer service held all at the Minot Railroad Museum.