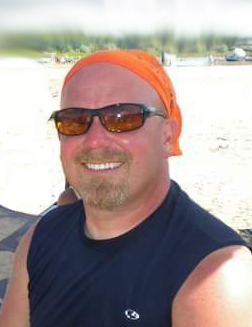 Posted at 22:48h
in Uncategorized
by staff

Mike Scherr, 52, of Bismarck, ND passed away at his home of natural causes on Friday, January 5th, 2023.

Mike was born August 6th, 1970, to George and Lois Scherr in Bismarck, ND. After graduating high school from Bismarck Century in 1989, he went on to study Business at Moorhead State. He began selling insurance for Aflac, which he enjoyed establishing long lasting relationships with his customers.

Mike loved to travel in those early years going on many cruises and spending time on the beaches of Mexico with his family and a friend. During the summers, you could find him on his beloved boat on the river parked at a sandbar or at his condo’s pool enjoying life.

Mike was the Funcle before it was a word. Only being ten to fifteen years older than his nieces and nephews, he loved taking them to the zoo and amusement park in his flashy cars, buying them all the candy and letting them drive his remote-control toys. This all continued on with his great nieces and nephews. He will always be remembered as the uncle with the wallet on fire to them.

He loved to cook and was always coming up with concoctions in the kitchen. He used this passion to fuel his small business of Mike’s Pickle Emporium, which kept him very busy fulfilling his large orders from devoted customers of his famous pickled everything. His picked eggs and watermelon were unforgettable.

Mike didn’t meet someone he couldn’t have a conversation with. He had many, many friends at some of his favorite places including The Pier, the Drink, the Broken Oar and Hawktree.  He loved a good joke and was always reciting movie quotes. He enjoyed making others laugh, even if at his own expense. You could catch him doing a magic trick or card trick to entertain others to make them smile.

Mike had a very special relationship with his mother, Lois “Babe” Scherr.  In recent years, he was her caregiver and best friend with entertainment daily from long car and boat rides to eating at their favorite restaurants to cooking together and watching the Vikings. He was her pride and joy.

He is preceded in death by his father George Scherr and brother in law Kent Neustel.

May we all see the funny in life like Mike did. There will be a Celebration of Life for Mike this summer, as he would have loved.