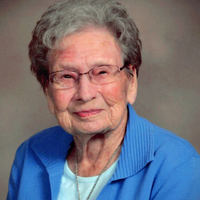 Visitation will be from 5 to 7 p.m. Sunday, July 18 at Parkway Funeral Service, 2330 Tyler Parkway, Bismarck.

Grace was born to Carey Johnson and Ida Dietzman Johnson on April 27, 1918, north of Sterling. Grace was proud to tell how her mother delivered her at home while the family was away. She was the youngest of six siblings. She was raised on the farm north of Sterling until she was twelve when the family moved to Bismarck.  She attended schools in Sterling, Bismarck and International Falls, Minnesota.  While attending school in Sterling, arrangements were made for Grace to stay with the teacher because her parents were unable to get her to school due to extreme weather conditions. She lived with her sister, Mildred, and attended school for a short time in International Falls.

From 1935-36 Grace worked in the cafeteria at the Capitol building in Bismarck. She waited tables, made fountain drinks and learned to balance huge round trays of glasses resulting in stiff and sore muscles.

In 1934 she met Edward Hoge at a barn dance when she was 16. They married in November 1937. Following the church wedding, a dinner and dance were held at the Hoge family farm north of Bismarck where they made their home for the next 42 years. Three sons were born while they were living and farming, north of Bismarck.  Grace was the embodiment of a hardworking farm wife through the 30’s and 40’s.  She prepared meals for numerous threshing crews and did laundry for the hired help who came from the penitentiary because of the shortage of manpower due to the war.  While the family home was being remodeled, Grace cooked meals over an outdoor open fire.

Grace served her church as a Deacon, Circle Leader and a volunteer. She spent many hours in the kitchen and in 1994 was presented the Honorary Life Membership of Presbyterian Women, Presbyterian Church, USA.  She was a charter member and president of the Riverview Township Homemaker’s Club and served on the township’s school board for many years.  Her talents and interests were many including sewing, crafting, baking wedding cakes, crocheting, embroidery and gardening.  Grace faithfully read the newspaper and worked word search puzzles every day until recently.  She was a wonderful cook and spent hours poring over recipes and cookbooks filling them with notes up until several months ago.

Grace was preceded in death by her parents; her husband, Edward, in 1982; son, Dennis, in 2006; and siblings, Raymond, Carey, Mildred, and twins, Ernest and Edgar Johnson.

Memorials may be given to the First Presbyterian Church, 214 East Thayer Ave., Bismarck, ND 58501 or donor’s choice.