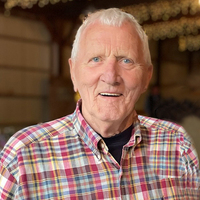 Clayton Wayne Brevig was born December 29, 1943, in Minot, ND to Harry and Erna (Sayler) Brevig. Clayton grew up on the family farm outside of Sawyer, ND. He attended school in Sawyer and graduated from Sawyer High School in 1962.

Clayton enlisted in the US Army National Guard March 10, 1964. He remained on active duty until he was honorably discharged on April 22, 1970.

Clayton was united in marriage to Judy Tofteland, who he called “My lil’ darlin” on September 17, 1965, in the original St. Peter’s Church in Sawyer.  They started their life together in Minot, ND, where they welcomed their two beautiful daughters, Shelly in 1968 and Deanna in 1971.

Clayton had various types of jobs throughout his life, but the majority of it was spent in the grocery industry. He began as a stock boy, in Minot, later moving his family around 1978 to Fargo. His career as a branch manager then took him and Judy to Liberal, KS, Denver, CO, with retirement bringing them back to Sawyer to be closer to family. He was pretty proud of himself for his life accomplishments to have been a boy that grew up on a farm in rural Sawyer, ND with only a high school education. That’s where we get the saying “We come from good stock!”

In his younger years, Clayton enjoyed playing basketball for Sawyer High School, and was proud to play right up there alongside his big brothers. Clayton enjoyed the simple things in life which included being with the people he loved, time with friends, playing cribbage or pinochle and the taste of a teeth chilling cold one.

He spent many weekends watching the Bison, the Broncos and of course his ‘Dukies.’ Spending time with his family was the most precious thing to him. He often told the stories of his childhood and his girls growing up. He loved watching his grandchildren grow and valued the time spent attending their special events, graduations and marriages. Great grandpa was one of his favorite titles. He made so many memories with so many people but most important were the moments he spent with his ‘rock’ Judy. There was not one thing she wouldn’t do for him or him for her.

Clayton was preceded in death by his parents and brothers and sisters-in-law Errol, Harlan, Arlo (Shirley) and Doug (Judy) Brevig.