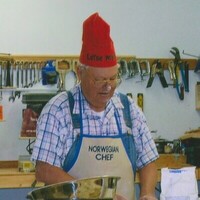 Bill was born on June 2, 1943, in Stanwood, WA to Jim and Inga (Thompson) Fure.  He grew up in the Cedar home area of Stanwood. He attended Stanwood Schools first through 12th grade. He started working at Twin City Foods in Stanwood during the summers

Bill met Vicki Graeber in July of 1968, when she was visiting family in Stanwood.  They were married December 28,1968, in Stanwood.

Bill’s first love was for his family and friends, then lefse making which is where he got the title “Lefse King”, hunting in WA, MT, ID, Co, and ND. He shot many big deer, of which he had the horns hanging in his garage. He loved to spend time with his grandchildren, Josh, and Jessica. He was there when his son, Bill (Boot) got his first deer.  He went back to WA to be there when Josh got his first deer. Jessie would pick “bugs” out of Grandpa’s hair, which was a game Bill played with his Grandpa Thompson. (No, there were no bugs in Bill’s hair.)

His daughter, Wendi Pooh, was a very “special” person in his life. Papa and Wendi shared many exciting adventures together.

Bill had the honor of being made an Honorary Fireman in the Garrison Fire Department.

We will miss you, “Lefse King”.

Creation has taken place.  A memorial service will be held on June 2,2023 in Garrison to remember him and celebrate his life.