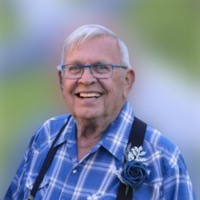 Celebration of Life will be held on Thursday, December 8, 2022, at 2:00 pm at Garrison Golf Course. Burial will be held in the spring at the Underwood Cemetery.

Bill was born January 15, 1943, in Minot, ND, to Roy and Margaret (Perry) Carlson. He was raised and educated in Upham, ND. He went on to college at North Dakota State School of Forestry in Bottineau, ND and North Dakota State School of Science in Wahpeton. While in Wahpeton, Bill met Carol Boschee. Bill and Carol were married in Little Falls, MN, on October 3, 1965. They were married for over 52 years and had three children; Jeffrey, Brian, and Carrie. The couple lived in many different states including North Dakota, Nebraska, Michigan, Minnesota, Iowa and Wisconsin. While in North Dakota, they lived in many different cities, but Underwood and Riverdale were always considered home. Carol passed away in 2018. In 2020 Bill moved to Edgewood Vista in Fargo. While there he met Cleo Jahnke who became a special friend to Bill.

Bill served in the North Dakota National Guard from 1966 to 1971. He was a member of the American Legion in Riverdale, including serving as Commander. Bill spent most of his career working for the Corps of Engineers as a construction inspector. He enjoyed golfing, camping, playing cards, and being with friends and family. Bill was outgoing and a jokester. He wasn’t happy if he wasn’t picking on or teasing someone and everyone was a friend.

He was preceded in death by his wife, Carol; his parents, Roy and Margaret Carlson; and his sister, Theresa Brandt.

In lieu of flowers the family asks you send memorials in honor of Bill to the Minnesota & Dakotas Chapter of the Parkinson’s Foundation, www.parkinson.org/MinnesotaDakotas.