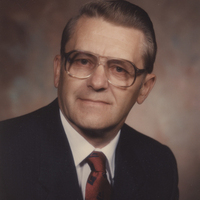 There will be a chair missing at the head of the table at this year’s Christmas dinner. Percy Radke of Minot has gone to be with the Lord. He died November 24, 2022 in a Garrison skilled nursing facility in the company of his loving wife and two adoring daughters.

Born September 19, 1933 to Elmer and Tillie Radke, Percy grew up in the Underwood, ND area. A child of the depression, he quickly learned the value of hard work, the ability to appreciate what little he had, and the importance of following the Lord Jesus Christ. By example, he instilled these values in his children and grandchildren.

Percy was an accomplished carpenter and mechanic. He devoted over thirty years to the Ford Motor companies of Minot and Bismarck as a mechanic, salesman, and service manager.

Prior to that he was a foreman for the construction of Garrison Dam. He loved Lake Sakakawea, camping there and teaching his daughters how to ski out of “Percy’s Cove”. Later he purchased a cabin south of Garrison. It became the source of untold memories and adventures. The cabin was his “Happy Place”.

A memorial ceremony will be held December 16, 2022 at 11 am at First Baptist Church, Minot.

A Visitation will be held one hour prior to the start of the service.

Memorials may be given to Samaritan’s Purse or First Baptist Church.