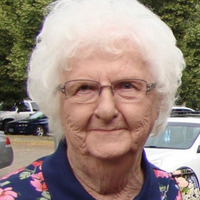 Burial will be held 12 p.m. Wednesday at the North Dakota Veterans Cemetery, Mandan.

Auriel was born June 17, 1933, in Steele, the daughter of John and Elsa (Lunner) Abbott. She graduated from Dawson Public School in 1951. Following high school graduation, she attended Valley City State College, graduating in 1953. Auriel was united in marriage to Richard “Dick” Luedtke on July 23, 1955, in Dawson. She later continued her education at Dickinson State College, graduating in 1962. Auriel taught school for 30 years at New Salem, Dawson and Dickinson. Auriel and Dick lived throughout Montana, Washington and Grand Forks before settling in Dickinson up until Dick’s passing in 2019.

Auriel was a member of St. John Evangelical Lutheran Church. She and Dick had a passion for flowers and working in the yard, winning Yard of the Month in Dickinson. Auriel was an outstanding basketball player in high school, even leading her team to win a state championship. She enjoyed watching basketball on TV as well, along with figure skating. She loved playing cards, especially whist. She was a collector of many things and decorated for each and every holiday and season. Perhaps her greatest joy was spending time with her family; there wasn’t an occasion too small to celebrate.

A special thank you to St. Vincent’s for the loving care Auriel received.