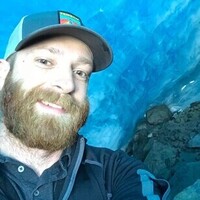 Jeremy Michael Goetz, 35, Park City, UT, was called home by his Creator on July 6, 2021. Mass of Christian burial will be held 11 a.m. Wednesday, July 14, at Cathedral of the Holy Spirit, 519 Raymond St., Bismarck, with Msgr. Chad Gion and Fr. Joshua Ehli, officiating.  For those unable to attend the Funeral Mass, a livestream will be available at this link: https://venue.streamspot.com/event/Mjc0MzYzOA==

Visitation will be held from 5 to 7 p.m. Tuesday at Parkway Funeral Service, 2330 Tyler Pkwy, Bismarck. A prayer service will begin at 7 p.m.

Jeremy was born on June 6, 1986 in Bismarck to James and Devon (Bauer) Goetz. He was raised in Center and graduated from Center High School in 2004.  As soon as Jeremy could walk, he proudly toted a toy toolbox around the house saying, “The kids call me Mr. Fix It!”  From a young age, he was really good at taking things apart, but not so great at putting things back together.  That quickly changed – by the time Jeremy was a teenager, he was quite the self-taught handyman with guidance from his dad.  In high school, he proudly drove a 1988 Berretta GT, which he completely refurbished and proudly painted “Dukes of Hazzard orange.”  If something needed to be repaired, he just figured it out.  He replaced all of the flooring in his parent’s house, installed new vanities and fixed anything and everything that needed to be updated.

Jeremy was the baby of our family but blazed his own trail with the help of lifelong friends. He was an avid outdoorsman and an adventure seeker. He gained his love of hunting from his high school buddies and their families.  And, his love of snow skiing from family ski trips to Big Sky starting around age 5.  He was known to take risky ski jumps from a young age.  One time he wiped out so badly, his dad had to carry him down the mountain.  When they reached the bottom, he jumped out of his dad’s arms and was ready to go back to the top.  Hunting and skiing were lifelong passions of his.

After high school, Jeremy attended the University of North Dakota, majoring in Engineering.  While in school he hauled beets during sugar beet harvest for Thorson Farms.  After UND, Jeremy went to work in the oil fields in western North Dakota, where as foreman of drilling fluid recycling for several rigs, he made good money and spent it all on hunting decoys, shotguns, skiing equipment and going on one adventure after another.  After leaving the oil fields, he started his ultimate adventure – following his dream of becoming a helicopter pilot.

In 2014, he packed up his pickup and headed to Sherwood, Oregon, to start flight school.  While attending school, he put his “Mr. Fix It” skills to use as a helicopter mechanic.  On March 20, 2015, he completed his first solo flight.  From there, he was always on the go – logging in Oregon, fighting forest fires in California, flying tourists around in Alaska, helping with hurricane repairs in Puerto Rico and most recently, delivering humanitarian aid in Indonesia.  He was famous for letting his family know he was going to go on an adventure after he was already halfway around the world.  During the “off season” he was part of the ski patrol in Park City, Utah, and recently completed EMT training to take on a larger role within the ski patrol.

A post Jeremy recently made on Facebook really says it all: “Been a million miles, a thousand places and met a thousand faces.  Often one moment blurring to the next on a nonstop adventure with an occasional break slowing down to regain my sanity, figure out where I want life to go next, and to get to know the people around me becoming friends.  For those I consider friends, you have been both the break and the best part of this adventure called life that is both dizzying and dazzling.  I appreciate and love all of you!”

Jeremy is survived by and will be so deeply missed by his parents, Jim and Devon Goetz, Mandan; siblings, Chris Goetz, Carey Goetz (Jason Ziemann), Sarah (Tyler) Getzlaff and Jenny Goetz; his nephews and niece, Caiden, Carter and Piper Getzlaff; many aunts, uncles and cousins; as well as by so many great friends from North Dakota and all over the country.

Jeremy was preceded in death by his grandparents, Tony and Rita Goetz and Albert and Frieda Bauer; as well as by his cousin, Brad Kramer; aunts and uncles, Shirley and Cecil Kramer, Darlene Bakken and Karl John Goetz (infant).

In lieu of memorials, the family asks that you reach out to friends and family who may be suffering in silence.   Communication is a two-way street – be the one to reach out, knowing some cannot.  If you prefer to send a memorial in Jeremy’s name, the family prefers they be sent to Village Family Service Center at 2207 E Main Ave, Bismarck, ND 58501.