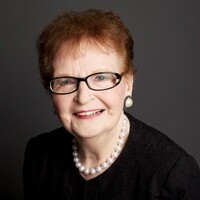 Edna was born December 29, 1924, on a farmstead in Blackwater Township west of Emmet, ND to Jacob and Martha (Abel) Arndt.  She attended rural schools and graduated from Garrison High School in 1944.  Following high school, she worked at the Garrison State Bank in Garrison and the Bank of North Dakota in Bismarck.  She roomed with three girlfriends in Bismarck who apparently knew where to hang out in Bismarck to enjoy themselves.  She married Arthur Mahowald, a Garrison native, on August 10, 1948, at St. Nicholas Catholic Church in Garrison.  She was a homemaker who loved to cook and bake, and enjoyed decorating and entertaining for any occasion.

She had a true knack for decorating and could always come up with a design to meet any occasion.  She also had a sweet spot for jewelry and loved to spend hours shopping for those many special pieces.  Following the graduation of her children from high school she worked as a bookkeeper before opening a gift shop on Main Street in Garrison, The Treasure House, which she owned and operated in the mid 70’s through the 80’s.

Edna and Art were blessed with two children, Douglass and Joan.  Art passed away on December 25, 1997. Following Art’s death, she continued to live in Garrison for about three years before moving to Bismarck to be closer to her children and grandchildren.  In Bismarck, Edna belonged to multiple bridge clubs and loved to entertain and play bridge with her friends as well as follow her grandchildren’s activities.  We understand she was an excellent bridge player and often seemed to bring home the top prize, which sometimes got as high as 25 cents.  She was hampered by several health issues in the last years of her life that sadly left her unable to play bridge and hit the second-hand store circuit.

Edna is survived by her son and daughter-in-law, Doug and Kayla Mahowald, Bismarck; her daughter, Joan Glasser; her grandchildren, Jack Glasser (Jace Schacher), Anastasia Glasser (Logan Schmaus), Megan Mahowald, Lakewood, CO, and Michael (Daygan) Mahowald, Calgary, Alberta; her sister, Ethel Sayler, Great Falls, MT, who was a huge comfort to her in her declining years; and several nieces and nephews.

Edna was preceded in death by her parents; her husband; her brothers, Erhart Arndt and Edward Arndt; her sister, Elsie Hagge; and an infant brother, William.