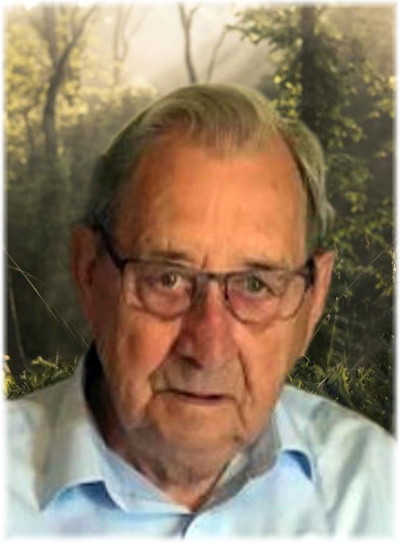 Harry Lenz, 97, Dickinson, passed away on Sunday, October 30, 2022 at St. Luke’s Home, Dickinson. Harry’s Funeral Service will be at 10 a.m., Friday, November 4, 2022 at Prairie Winds Church, Dickinson with Rev. Jerry Stravia IV as officiant. Interment will take place the Dickinson Cemetery. Visitation will be from 4 p.m. to 6 p.m. on Thursday at Ladbury Funeral Service, Dickinson. Visitation will continue one hour prior to the service at the church on Friday.

Harry Adolf Lenz was born March 4, 1925 in Gladstone, the son of Adolf and Ida (Brandt) Lenz. He graduated from Taylor High School and received an honorable discharge from the United States Navy in July 1946.

Even though Harry didn’t have any experience or training in the field of banking, The First National Bank trusted that he would become a valued employee. He kept that trust after filling many titles during his tenure of service. He started in the bookkeeping department and worked his way to vice president and auditor. He also met his wife, Ruth, at the bank who worked in bookkeeping. They married and raised four children.

Harry was active in the Dickinson community, holding memberships in the Elks, Eagles, Veterans of Foreign Wars, United Commercial Travelers, Kiwanis, Masons, Odd Fellows, and a dedicated member of the Methodist Church. He enjoyed, gardening, fishing and spending time with family.

He was preceded in death by his wife, Ruth; parents; brothers, Herb, Richard, and Robert; three sisters, Dorothy, Ida and Emily.