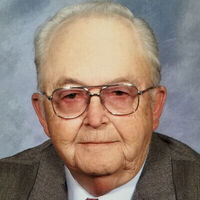 To view a livestream of the service access: www.firstlutheran.tv

Loren was born January 10, 1936, in Sanish ND, the son of Gilbert and Gladys (Tollefson) Johnson.  After the death of Gladys, he was adopted by Clarence and Grace (Vesey) Knutson.  He was raised on the rural Knutson farm near Plaza, attended rural elementary schools, and graduated from Plaza High School in 1953.   He later furthered his education through correspondence classes while working for Northern States Power Company.   He completed the course DC Electronics from North Dakota State School of Science.  He also continued with other correspondence classes that would be beneficial for his employment.

Loren was proud of the fact that during high school his serious work ethics always guaranteed him a job with one of the area farmers. He spent several summers with a combine crew traveling to states in the South.  After high school he worked as a route salesman for the Plaza Farmers Union and as a feeder driver and route salesman for Bismarck/Dickinson Eddie’s Bakery.  He then moved to California and worked for Chrysler Corporation and Byron Jackson Pump Company.  He later served in the U.S. Army.  After his honorable discharge he worked for R.A. Prather & Son in Tioga.  In October 1962, he began his 33-year career with Northern States Power Company (XCEL Energy).  Through the years, he held many positions in the Engineering Department:  Engineer Clerk, Engineering Aid, Mapper-Locator, and Assistant Designer.

He married Joylea Bowen in Ryder, ND, on May 2, 1965.  They continued to live in Minot and raised four sons.  Wherever the boys were involved Loren was also.  Vacation time was often spent supporting a youth activity, on a camp outing, or spending a week at Boy Scout Camp. He was active in North Hill PTA, Pack/Troop 425, Minot Soccer Association.  A good weekend included a fishing trip.

The addition of Grandson Jaden was a special time for Loren.  The excitement of new youth, relationships with the uncles, birthdays at the motel, and vacation days were very special and created a special bond that will always be appreciated.

Loren was proud to be a part of Minot North Hill development.  Time was spent with the youth working and planting trees at the new soccer complex and he helped with improvements and construction of the picnic shelter at Polaris Park.

Loren was always interested in wood working.  New tools usually ended up with their own carrying case.

Loren enjoyed a summer golf game and spent many winter hours at the Minot Curling Club.  Many good stories evolved from a bonspiel.

After retirement Loren had various part-time jobs and spent time working with Wally Holter at the Norsk Hostfest warehouse.

Celebration of Life Service: 1:00 p.m. Friday, November 4, 2022 at First Lutheran Church, Minot. To view a livestream of the service access: www.firstlutheran.tv
Interment: Rosehill Memorial Park, Minot
Visitation: Thursday, November 3, 2022 from 4:00 p.m. to 6:00 p.m. at the Thomas Family Funeral Home, Minot.
In lieu of flowers or plants memorials are preferred to the donor’s choice.