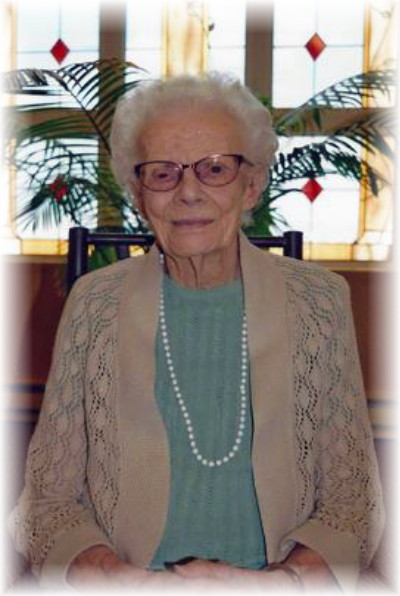 Dorothea Ziegler, 103, Bismarck, passed away on Saturday, October 22, 2022 at Edgewood Village, Bismarck. Dorothea’s Celebration of Life Service will be at 2 p.m. MDT, Friday, October 28, 2022 at Ladbury Funeral Service, Dickinson with Pastor Lisa Lewton as officiant. Entomment will follow at the Dickinson Mausoleum. Visitation will be one hour prior to the service.

Dorothea married Herbert Ziegler on May 30, 1943 and they farmed near Richardton for 16 years and then moved to Dickinson in 1959 where they raised three children, Duane, David and Kathleen. Dorothea was active in the St. John Lutheran Church in Dickinson in circles, Bible studies, altar guild and taught Sunday school. She was also active in homemakers, Christian Women’s Club and Germans from Russia Society where she was a life member. She enjoyed gardening and was known to have a green thumb and could grow anything. She was skilled at reading and writing German and was often called upon to translate letters written in German for church histories and for many people throughout ND.

Dorothea worked as a charge nurse at St. Luke’s Nursing Home and St. Benedict’s Health Center in Dickinson, prior to her retirement in 1983. After retirement she volunteered at St. Luke’s , St. Ben’s, Evergreen and Hawks Point long-term care facilities; Church Parish Life and served as an ombudsman at St. Luke’s. In 2010, she moved to Edgewood Vista in Bismarck to be nearer her family.

Dorothea was preceded in death by her husband, Herbert on August 31, 1997; her parents; two infant sons, Paul and Mark; and three brothers, Martin Bergstedt, Herman Bergstedt, and Friederich Bergstedt.

Dorothea is survived by her sons, Duane (Carol) Colona, IL and David, Centennial, CO; and one daughter, Kathleen Mangskau (David), Bismarck; two grandchildren, four great-grandchildren; one great-great-grandchild; and many nephews and nieces.

In lieu of flowers, memorial contributions may be made to the St. John’s Trust Fund in Dickinson or to the charity of your choice.