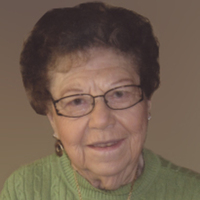 Christine Weigel, 96, Minot and formerly of Harvey died on Tuesday, October 18, 2022 at her home.

Christine Margaret Thomas was born on January 8, 1926 in Selz, ND to Michael and Kathryn (Weist) Thomas. She was raised in Selz and Harvey and attended school in Selz.

Christine married George B. Weigel on September 8, 1943 at St. Cecilia’s Catholic Church in Harvey, ND.  They made their home in Harvey for over 50 years where they owned the Standard Oil Station and then George managed the Farmers Union Oil Station for 25 years. Christine was a stay-at-home mom and homemaker always providing wonderful meals. They retired in 1985 and moved to Minot in 1997 after spending many winters in Mesa, Arizona and Washington state. George died on June 21, 2006.  Most recently, Christine had resided at Dakota Terrace Apartments.

Christine was a member of Our Lady of Grace Catholic Church – Minot and its St. Francis Circle. She was a former member of St. Cecilia’s Catholic Church, its Confraternity of Christian Mothers and charter member of the St. Aloysius Hospital Auxiliary in Harvey. She enjoyed reading and crossword puzzles and loved her grandchildren with all her heart. She especially enjoyed doing puzzles and playing cards with them. One of the best memories for Christine’s children were the Weigel picnics with all the cousins.

Mass of Christian burial:  Thursday, October 27, 2022 at 10:30 a.m. in Our Lady of Grace Catholic Church – Minot.
Visitation:  Wednesday from 5:00 p.m. to 7:00 p.m. with a Vigil Prayer Service following at 7:00 p.m. in Thomas Family Funeral Home – Minot.
Interment will be in Rosehill Memorial Park – Minot.
Memorials are preferred to Prairie Grit Adaptive Sports.