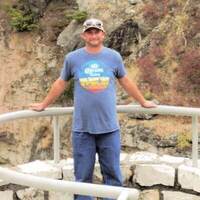 Please use this link to view the service livestream.

A memorial service will be held at 2:00PM, with visitation staring at 1:00PM Monday, October 10, at Bismarck Baptist Church, 2211 Laforest Ave, Bismarck.

Tyler was born May 23, 1983, to Kevin and Cheryl (Neff) Frederick in Bismarck. He was raised in the Bismarck, Mandan area and graduated from Bismarck High School in 2002.

Tyler led a simple life. He had many hobbies that were his passion. He loved spending his time with his grandpa Dean Neff, being out fishing and hunting along with many other family members and friends. He then took his time to teach his children how to fish. He enjoyed being able to pass his techniques onto his children. Other activities he enjoyed were snowboarding and frisbee golfing with his friends from childhood to adulthood.

members of his family including, Christine (Garvey) Emineth, Steve Garvey, Patrick Garvey, Mary Stene and Krista (Kickert) Frederick; many friends including, Wayne Winterberg, Wayne Helm and Andrew Richards. He’ll be missed dearly by his many aunts, uncles and cousins.

He was preceded by his mom Cheryl Frederick, grandmothers Frances (Iblings)Neff and Pauline (Deichert) Frederick.