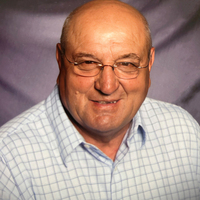 A service livestream will be available for view at Corpus Christ Catholic Church’s facebook link: https://www.facebook.com/CorpusBismarck/

Interment will take place with military honors following the funeral mass at 1:00 p.m. at the North Dakota Veterans Cemetery.

Jerry was born to Christ and Magdalena Bittner in Hebron, North Dakota where he was raised and attended high school. In 1964, Jerry enlisted into the U.S. Army where he was first stationed in Augsburg, Germany. After nine months in Germany, Jerry went to Vietnam until 1967 when he was honorably discharged.

Jerry spent the early part of his career owning his own service station in Strasburg, ND. Throughout the years, he worked in several different construction roles. He spent the last part of his career, working for Wanzek Construction as a Field Superintendent. After retiring in 2009, Jerry spent his time helping friends work on various projects. He was an avid golfer, enjoyed fishing and spending time with family and friends.

He is preceded in death by his wife, Kathleen Bittner; his father and mother, Christ and Magdalena Bittner and sister, Donna Miller.