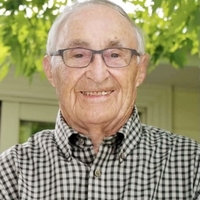 A service livestream will be available for viewing at the following link: https://www.youtube.com/watch?v=v3O3PQVvgcw

Theodore “Ted” Edwin Kempf, 97, passed away peacefully at home October 3, 2022, with his wife and one of his sons by his side.

Ted was born June 23, 1925, the son of Gottlieb and Lydia (Rothfusz) Kempf. He grew up on a farm in Ashley, ND. Starting his senior year at the age of 17 at Ashley High School, he was drafted into World War II on October 8, 1943. In the United States Coast Guard, Ted proudly served as a signalman second class petty officer on the landing ship tank, LST 168, in the Asiatic-South Pacific theater. While Flotilla Seven was “bombed, shelled, and torpedoed…not a ship was lost,” under the leadership of Commander Scruggs. Ted shared one of his proudest moments was to signal all the flotilla ships that Japan surrendered. He was honorably discharged on February 11, 1946.

Ted attended the Houston School of Horology to become a watchmaker. He began his employment at Westley’s Jewelry in 1947. In March 1957, Ted and his brother Rudy, purchased Knowles Jewelry. Their father, Gottlieb, often came to the store to help. Alongside Ted, Loretta was a jack of all trades in accounting, design, and displays for Knowles Jewelry. Their four sons gained life lessons while contributing many skills alongside many trustworthy employees. Despite all the help, Ted never found someone who could sweep the store’s front entry as well as he could. Ted advanced his expertise by continuing education and became a member of the American Gem Society. Ted and Loretta began their retirement after they sold the store in 1989.

From their wedding, September 19, 1948, Loretta and Ted were active members of First Lutheran Church for 74 years where Ted enjoyed singing tenor in the choir. For years he continued singing in the Senior Center Singers and last Memorial Day event at Touchmark. Ted was a community leader and contributed to the growth of the Bismarck by serving on the Bismarck Hospital Board of Directors and Board of Trustees and Kiwanis Club Board of Directors. He was a Cub Scout Master and served in the American Legion, a Chairman of the Goodwill Committee of the Bismarck Chamber of Commerce, a secretary of the Miss North Dakota Pageant, even managed a church softball team. Their home was the heart of all family gatherings. Ted loved to golf with his wife, sons, grandchildren, and his choose-up group.

Ultimately, Ted’s life is marked by purposefully being a loving husband, dad, father-in-law, grandpa, and great grandpa, who made everyone feel loved.

Ted was preceded in death by his parents, Gottlieb and Lydia (Ruthfusz) Kempf; his sister, Annetta Schock; his older brothers, Art, Rudy, and Ben; and his twin sister, Sylvia Brunskill.

In lieu of flowers, memorials can be made to the First Lutheran Church.