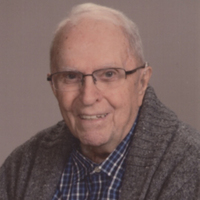 To view a livestream of the service, access https://www.facebook.com/stpaulslutheranchurchminot/videos/

Gene Rupp of Minot, North Dakota passed away on Tuesday, September 27, 2022, at the age of 91. After several months of declining health, Gene died peacefully with family by his side.

Gene Curtis Rupp was born at his parents’ home in Munich, North Dakota, on August 27, 1931 to father Henry E. and mother Annie (Quiring) Rupp. The youngest of three sons, Gene was raised in Munich graduating from Munich High School on June 2, 1949. His educational journey included graduating from the University of North Dakota in Grand Forks with a Bachelor of Science Degree in Business Administration on August 10, 1957. Gene’s Christian upbringing included his baptism and confirmation from Salem Lutheran Church in Munich.

Gene enlisted in the U.S. Army on February 2, 1955 and was stationed at Fort Sill, Oklahoma where he served in the Artillery Training Corp for Foreign Officers. This occurred during the Korean Conflict following which he was honorably discharged on February 7, 1957 with a Good Conduct Medal and an Expert Rifleman Commendation from the U.S. Army.

Following his service to country, Gene worked for International Harvester Company in Grand Forks. Gene was united in marriage to Nellie Fae Glock on November 22, 1958. They were blessed with three daughters: Cheryl, Becky and Kim. Gene and Nellie were blessed to share more than forty years together before her passing on July 8, 2003.

At the onset of their marriage, they lived in Thief River Falls, Minnesota. The banking industry filled Gene’s working years. He worked at the Credit Bureau in Devils Lake followed by a move to Minot and a Credit Manager position with Firestone. Shortly thereafter, Gene assumed the Credit Adjustor position at Union National Bank in Minot where he advanced to be Vice President in the Consumer TimePay Department. Following his retirement from the bank, Gene continued to work in the banking/credit industry with a position at Northern Tier Credit Union.

Gene’s life was focused on faith, family and community—in that order. He was a dedicated member of St. Paul’s Lutheran Church having held many positions (some of which were repeated) over the years including Treasurer, Elder, Chairman, and a member of many special committees and congregation directives. He was motivated by love, first, to his faith in Jesus Christ—then, to his family and home. He was highly dedicated to his responsibilities at work and found true enjoyment with his many friends throughout his long life. Gene gave his full effort to each and every need as it arose, in order of his priorities. Gene would say he enjoyed life, family and friends and above all else, he always felt blessed by God. Gene hoped his earthly example, as a “most grievous sinner” whom God richly blessed, would exemplify the wondrous grace of God and the joy one receives from God for those who embrace God’s will, not that of man. Gene remained a faithful Christian servant his entire life.

A visitation for Gene is planned for Sunday, October 2, 2022, from 3 to 5 PM at Thomas Family Funeral Home in Minot. The Visitation Prayer Service is scheduled for 5:30 PM. All are invited to attend. The Funeral Service will be held on Monday, October 3, 2022, at 10 AM at St. Paul’s Lutheran Church in Minot. To view a livestream of the service, access https://www.facebook.com/stpaulslutheranchurchminot/videos/

People wishing to honor Gene’s lifelong commitment to the Lord and his family can make donations to St. Paul’s Lutheran Church in Minot, the Dakota Boys and Girls Ranch Minot and the Lutheran Hour (direct funds to St. Paul’s noting your request).