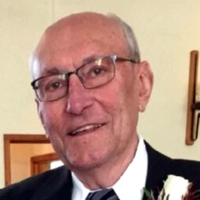 Interment will be held at The North Dakota Veterans Cemetery, Mandan.

Visitation will be held from 5:00 to 6:00 PM with a prayer service starting at 6:00 PM, Wednesday, September 28, at Parkway Funeral Service, 2330 Tyler Parkway, Bismarck.

Elroy was born in Harvey, North Dakota, on July 18, 1941, to Gottlieb and Margaret (Siegle) Dockter. He graduated from Goodrich High School in 1959. He served in the US Army and was stationed in Korea. Elroy was united in marriage to Linda Schmitz on February 10, 1968, at St. Cecilia’s Church in Harvey. Elroy was employed by JCPenney’s, Twin City Testing, and retired from Ulteig Engineers.

If we could sum up Elroy’s life in three words they would be: family, faith, and country. Time together as a family was of utmost importance. One of his greatest joys was being able to provide for his family. He was most content behind the wheel of the boat at Brush Lake and spent countless hours pulling kids of all ages. His faith is best summed up by his words when he became ill, “I will put it in God’s hands and see what happens.” He stayed true to that faith until the end. Elroy was a proud veteran who unselfishly served his country in the US Army and volunteered his time with various veteran’s groups.

one-liners, stories, and that mischievous smirk. Elroy was a handyman who could build almost anything and was our go-to guy when things needed fixing. His favorite colors were green and yellow, whether it be that of the NDSU Bison football team or the John Deere Tractor he restored.

He was preceded in death by his parents, Gottlieb and Margaret; brother, Erwin (Marion); sisters, Arlene (Joe) Primeaux and Yvonne (Virgil) Klang; and nephews, Donald Dockter and Mike Primeaux.

The family wishes to thank CHI Home Health and Hospice, Home Instead, and Home Care Companions for their compassionate care. A special thank you to his Sweet Pea (Ashly).