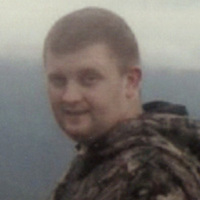 Britain was born November 2, 1978, to Thomas Argo and Aileen Morrisey. He attended elementary school in Carbonado, WA and graduated from White River High School in Buckley, WA. Britain enlisted into the US Navy during his senior year and started his military career five days after graduation from high school in 1998. Britain served his country honorably for 13 years aboard many ships and various installations throughout the United States and World. He was discharged in 2011.

Britain was united in marriage to Tammi Rush on January 26, 2006 in Illinois. They were blessed the birth of a daughter, Amber, later that year. After his military career concluded, they moved to Arizona, where he was employed by a copper mine for a couple of years. Their family continued to grow with the birth of two more daughters, Monica and Briana.

In 2012, Britain took a job with Flex Leasing Power and Service and was placed in Midland, Texas. He was reassigned to Williston, ND later that year and moved to Minot in 2019. At the time of his passing, he served the company as power technician with the company.

Britain was a member of Journey Church in Minot and devoted fan of the Seattle Seahawks on Sundays! An avid outdoorsman since his youth, he loved hunting and fishing with family and friends. He will be remembered as a quiet man that put everyone before himself and everything was second to his family.

Britain was preceded in death by his grandparents William and Lila Argo and Daniel and Cecilia Morrissey.

Celebration of Britain Argo’s Life:  2:00 p.m. Monday, October 3, 2022, at Journey Church in Minot with visitation held one hour prior to the start of the service in the church. To view a recording of the service access Britain Argo Memorial Service

Memorials are preferred to family.