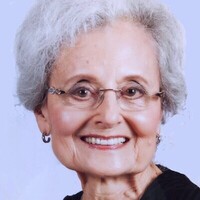 Catherine, the daughter of Anton and Anna (Wert) Duppong, was born in Glen Ullin, ND on March 14, 1926. She grew up with six sisters and four brothers on the family farm just outside of Glen Ullin.

After graduation at age 16, Catherine taught grades 1-8 in a one room school house for a year before moving to Bismarck, ND where she began working at the North Dakota State Capitol Building. It was there she met John Charles Fox, a World War II U.S. Army veteran who had returned to Bismarck in 1945 after completing four years of distinguished service in the battlefields of Europe.

John and Catherine married on November 25, 1946 and made their home in Bismarck, where they raised three children. They enjoyed 37 wonderful years together before John’s passing in 1983.

Catherine’s dedication to hard work was evident in her accomplished professional career. She served as Secretary to the Director of the Motor Carrier Division of the Public Service Commission, from 1956 to 1965. From 1965 to 1968, she held the position of Assistant to the Executive Secretary of the North Dakota Education Association.

In 1968, Catherine was appointed Deputy Clerk of the North Dakota Supreme Court, a position she held until her retirement in 1985.

After retirement, Catherine relocated to Santa Barbara, CA to be closer to family. Catherine especially loved the time spent with her children and grandchildren, all of whom were uniquely precious to her. She also enjoyed playing cards with her large circle of friends including bridge with the Queen of Hearts, and canasta with her special group of friends. Her needlepoint canvas pieces are fine works of art enjoyed by many. Cross country trips visiting with her siblings were always on the schedule. Catherine was an active member of the Town & Country Women’s Club.

Catherine was friendly, kind and gracious to everyone she met and her bright smile warmed the hearts of all those around her. She meant so much to so many: a devoted wife and mother, an adoring grandmother, a loving sister, a dedicated colleague, and a supportive friend. Her elegant charm, caring nature, energetic spirit, and clever wit will be deeply missed but will live on in the memories and hearts of everyone who was lucky enough to have known and loved her. We can truly say the world is a better place because she was here.

Catherine will rest with Tom at the Goleta Cemetery in Santa Barbara, CA. Memorial and celebration events will be announced at a later date.